Like many people this week, I was glued to my computer watching the amazingness of human ingenuity as NASA’s Curiosity rover landed on Mars. I cheered. I hearted mohawk-guy. I resisted the urge to run home and dig out my old star wheel, because as a grown-up, you’re really not supposed to own a star wheel.

I may have been a bit of a space nerd as a kid. I’m not sure if this was inspired by my love of Wesley Crusher from Star Trek: The Next Generation, or if it was due to the fact that I had read and re-read Douglas Adams’ The Hitchhikers Guide to the Galaxy to the point where I could (and still can) recite the opening pages by heart. The Guide was given to me by one of my uncles when I was about ten years old, mainly to help me play the text-based Hitchhikers Guide computer game, one of a handful of games that my grandpa installed on his very first computer. I still remember the blank, black PC screen with a single line of orange text:

‘You wake up. The room is spinning very gently around your head. It dips and sways a little.’

I believe the appropriate response was to type:

It was a lot more fun than it sounds. 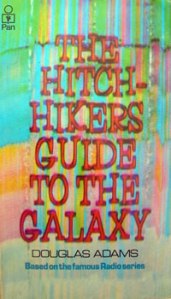 So – I read The Guide. I understood about half of it. But regardless, up to this point, my childhood reading consisted of a steady diet of Enid Blyton, L.M. Montgomery and The Babysitters Club, and The Hitchhikers Guide to the Galaxy was the first grown-up book that opened my eyes to the fact that language itself could be as rich and absorbing and funny and clever as the story being told. It was the first book I remember that had a distinct and identifiable authorial voice, and it influenced my reading tastes to this day.

I’ve gathered a few different versions over The Guide over the years, but my favourite is still my first copy; a small B-format paperback, battered and yellowed, spine cracked, pages dog-eared and some only tenuously attached. I know there is an ebook drinking game out there with my name on it; but one whiff of that musty smell of old paper, and I’m ensconced in front of my grandpa’s monochromatic PC with the book in hand, discovering a love of outer space, and cracking prose, and depressed yet lovable androids.

I haven’t read The Hitchhikers Guide to the Galaxy in years, but I feel like a revisit is in order now. As I wade through the pre-press, pre-publication phase of my novel, my brain is on uncertainty overload, churning through every failure scenario as only a proper neurotic writer can do (including one disturbing dream where my novel is jacketed with an awful cover that has, like, a comic sans title and an Instagram photo of my face on the front. Nice work, subconscious).**

A comfort book is a thing every true book nerd understands. My library has grown a bit since I was ten, and there is a giant pile of new, unread books teetering on my bedside table; but even glancing at those first few lines of the Guide – far out in the uncharted backwaters of the unfashionable end of the Western Spiral arm of the Galaxy – is as reassuring as a cup of tea and a fuzzy warm blanket.

** I have not seen the cover of my novel as yet, but I am pretty confident that it will feature neither comic sans, nor a picture of my face.